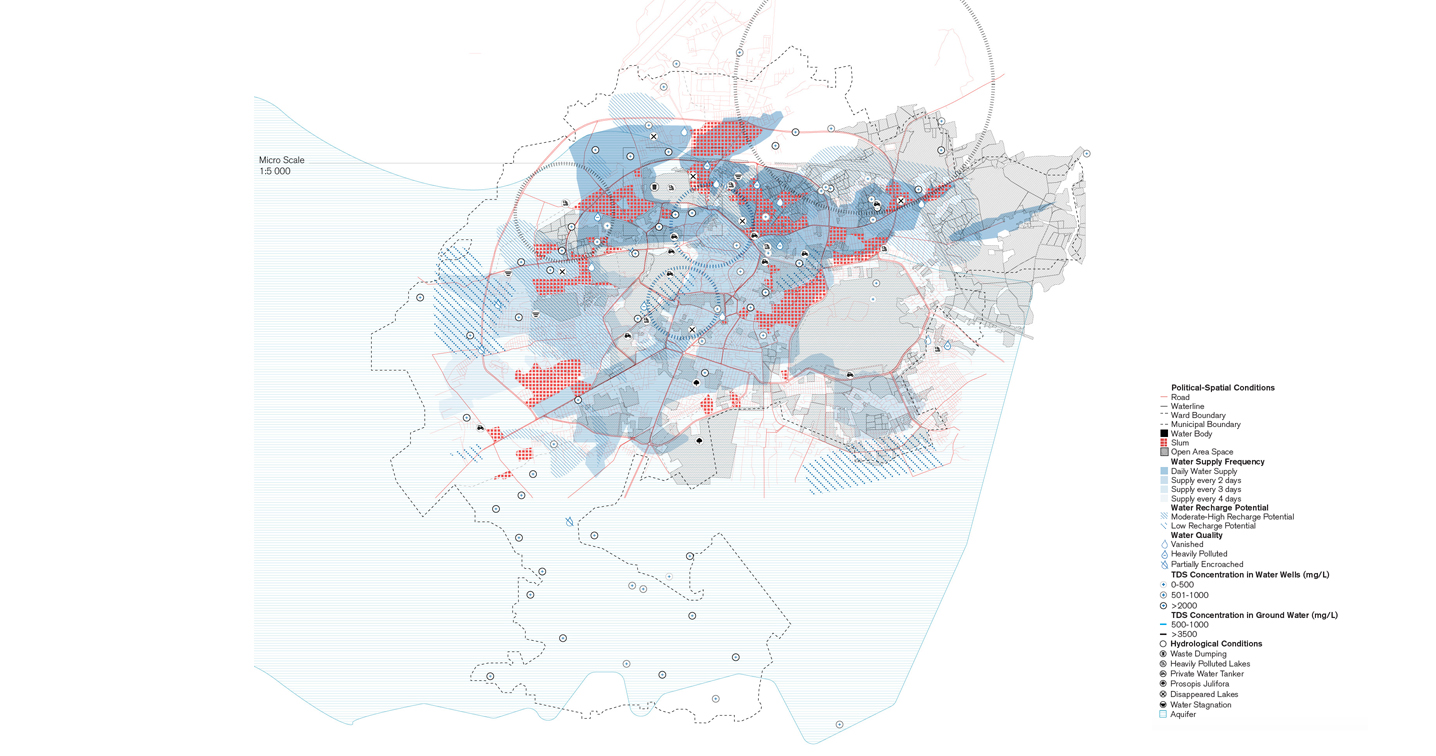 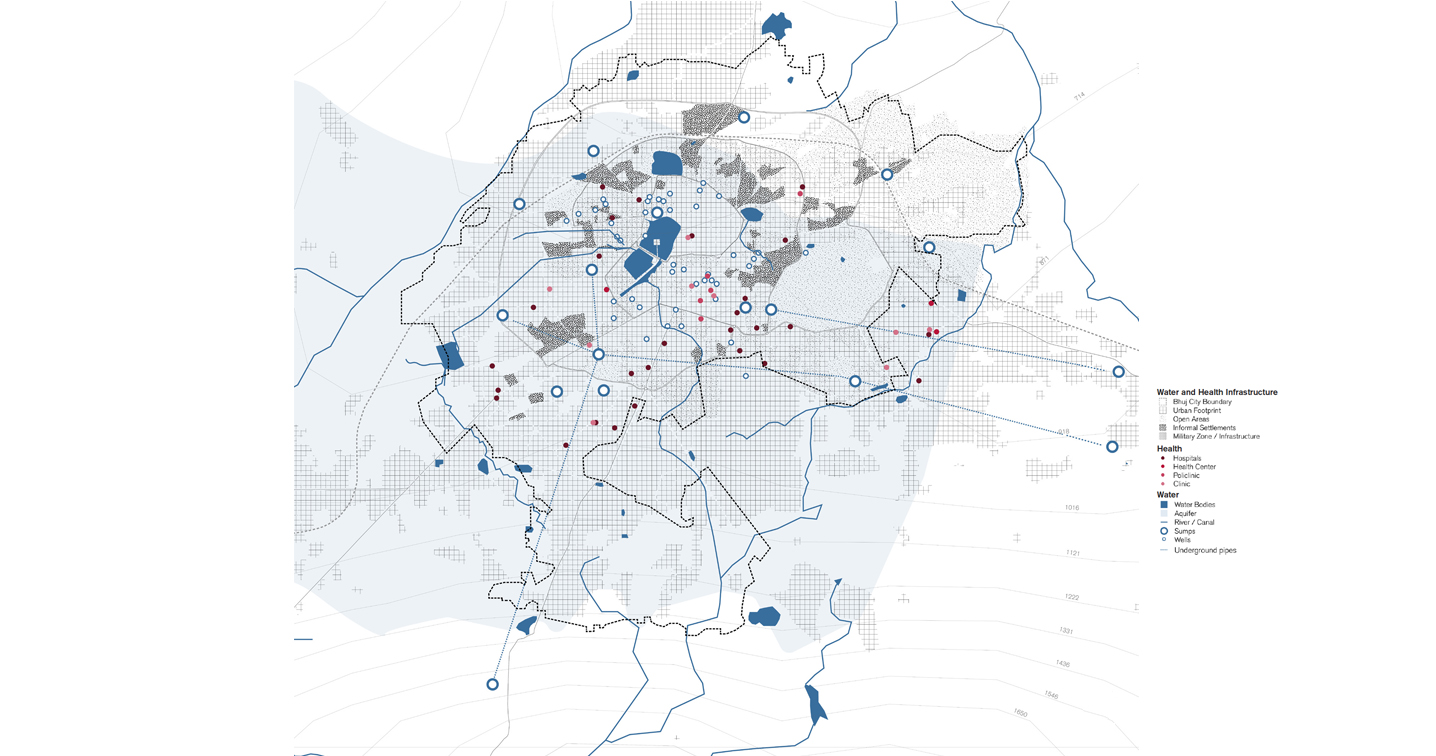 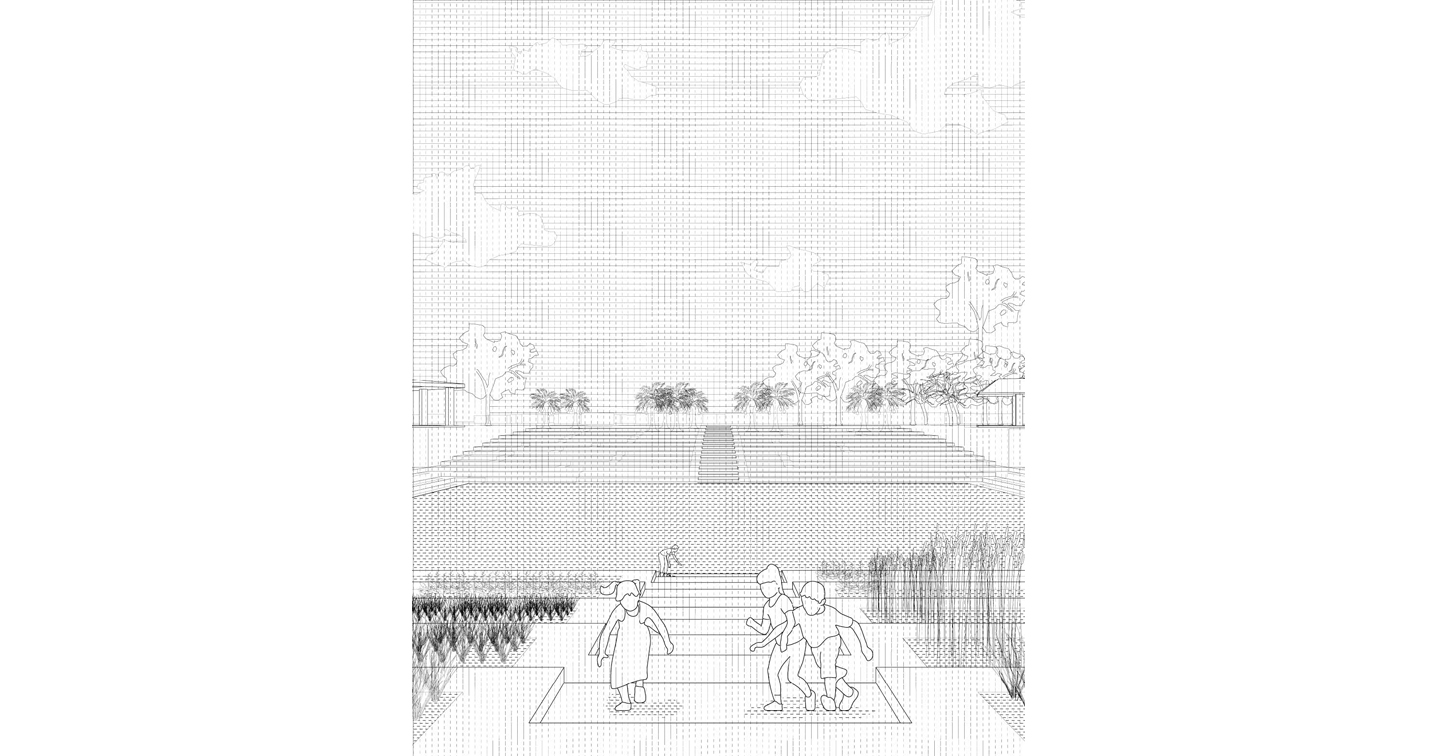 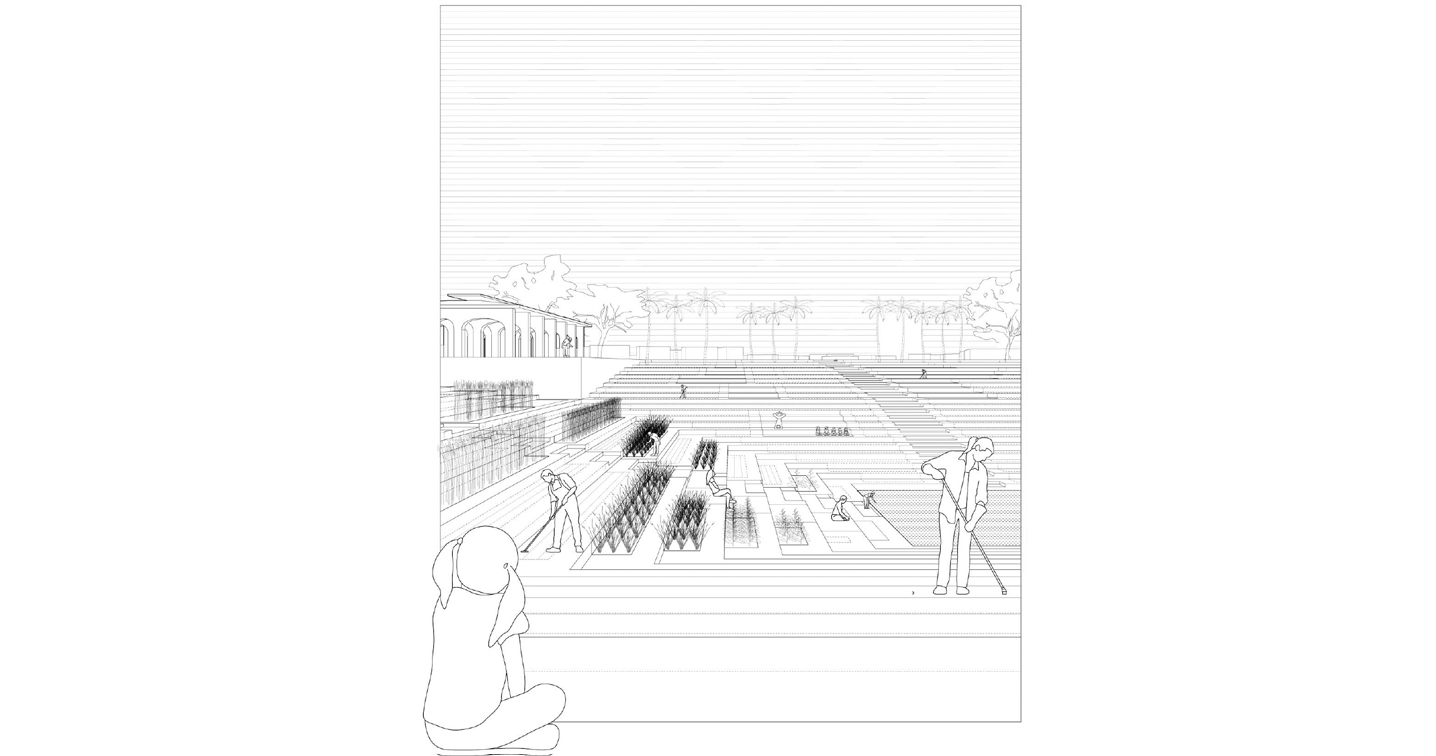 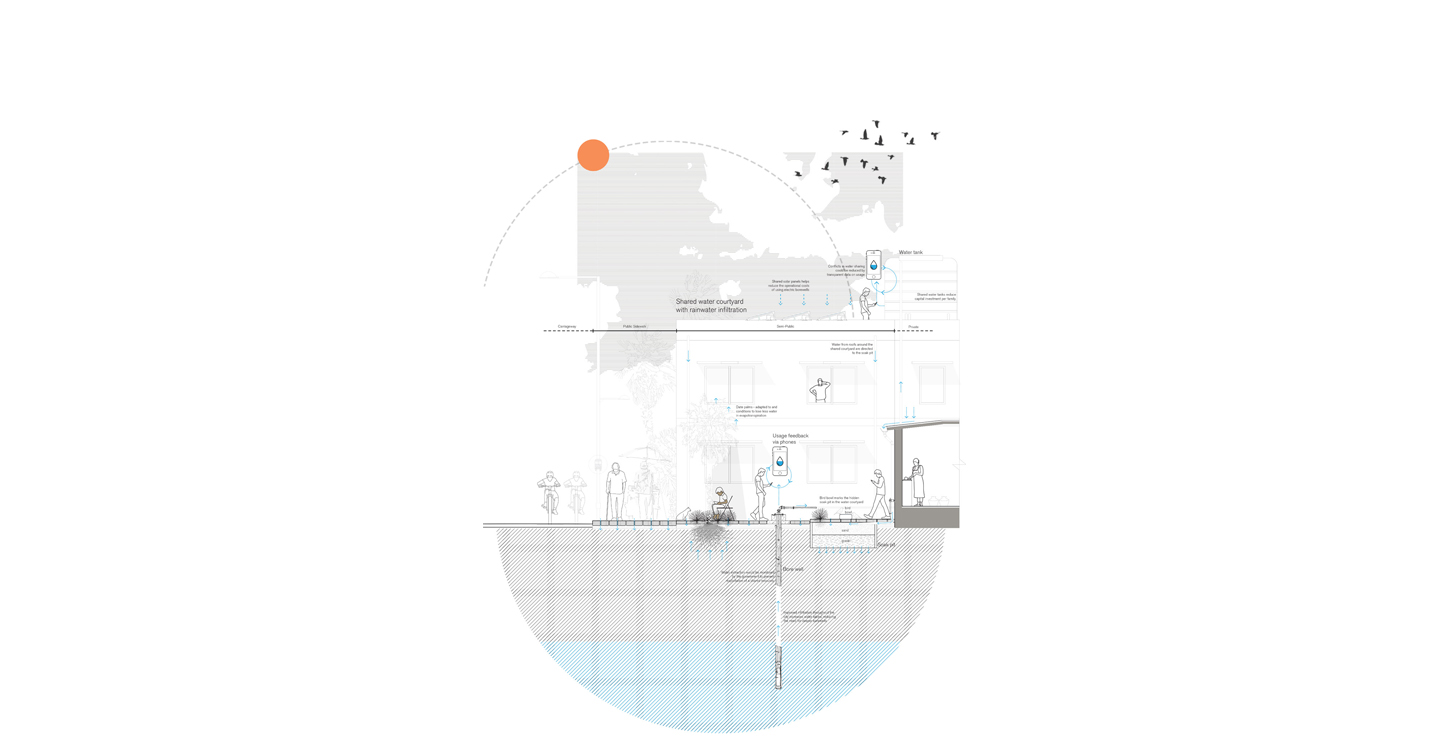 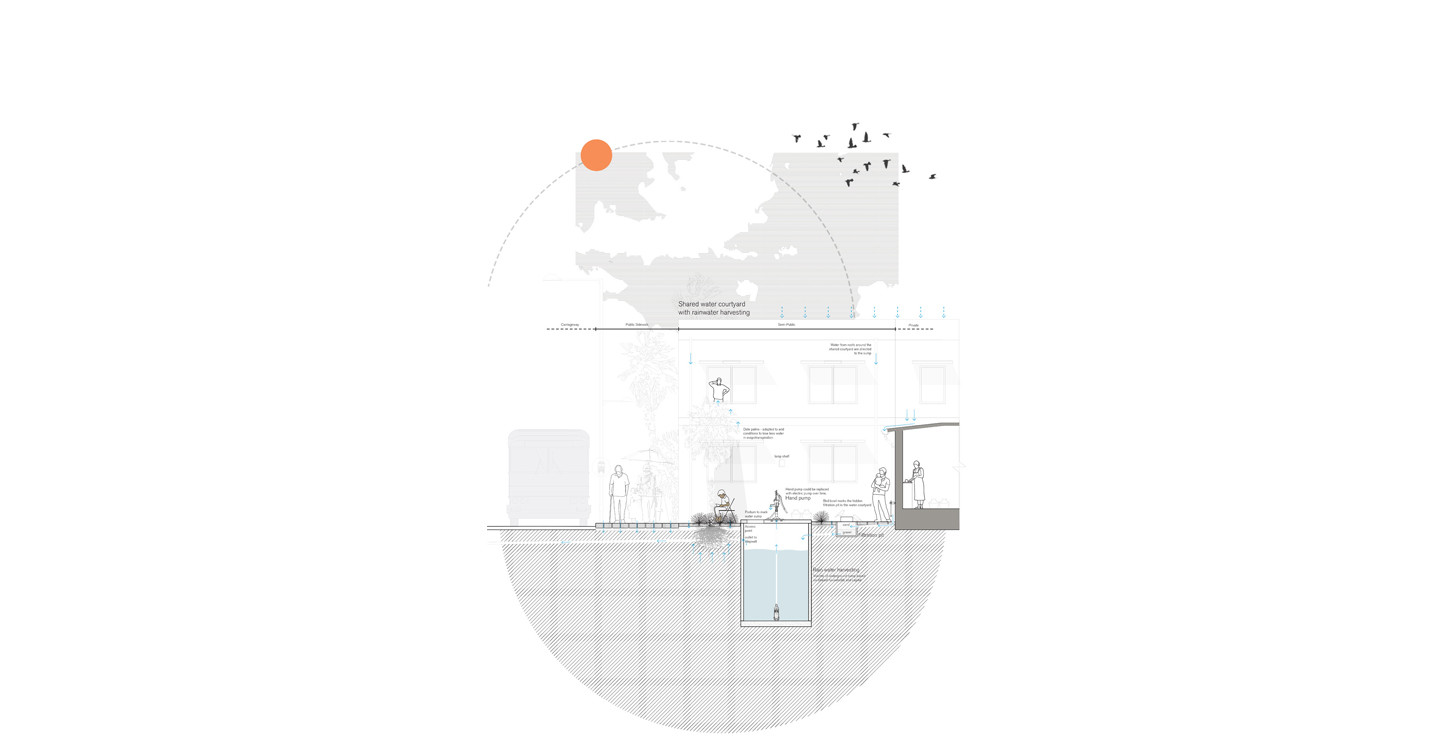 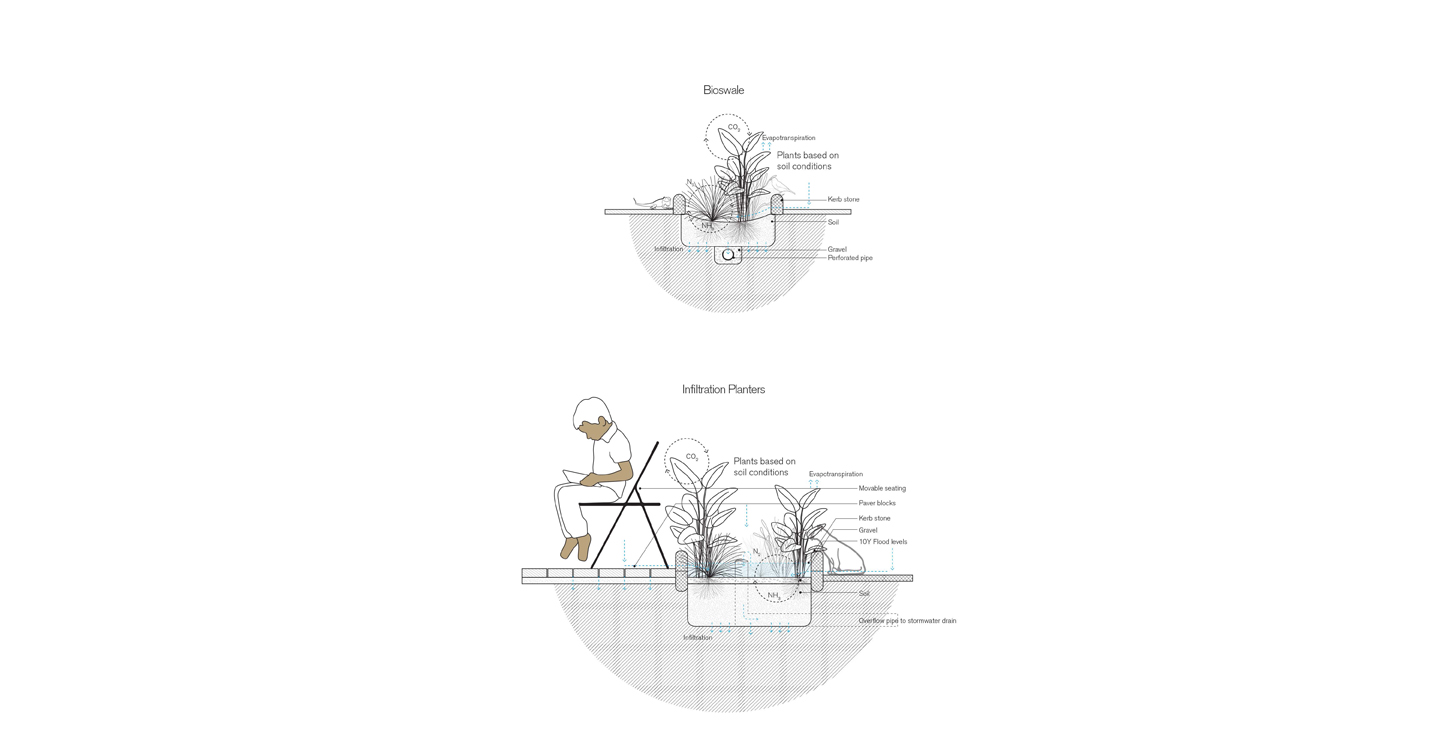 In collaboration with CEPT University, under the framework of NWO-DST Water4Change Research Programme.

With urgent urban challenges such as climate adaptation, energy transition, and continued urbanisation, the urgency of integrating planning and design with urban engineering increases. The implementation of new technological interventions and the utilisation of the natural system is hampered by the lack of an integrated approach incorporating urban planning and design decisions. Meanwhile, urban and economic growth increasingly competes for infrastructure and environment, affecting the success or failure of the daily operating systems of cities and regions and thereby urban competitiveness. The challenge is to fundamentally rethink the urban landscape in light of new technologies – as material and ecological practices. The question is how to renew existing urbanized areas by integrating parameters of the natural system and technological innovations directly into urban development opportunities arising from spatial planning and design.

In order to stimulate and design the synergy between design and engineering this course offers the possibility for architects, urban designers and landscape architects to get well acquainted with the concepts and language of civil engineers on the subject of infrastructure and environment; at the same time the civil engineers will get acquainted with the world and language of designers.

Bhuj is a city in the western state of Gujarat in India. Over the course of history, Bhuj has seen significant shifts in its socio-economic, ecological, infrastructural and political paradigms. It evolved from a princely state to a colonized territory and now, part of a rapidly growing country with infrastructure deficits and adaptation gaps in relation to current and future climatic, societal and economic changes.

By vary of it’s geographic realities of being situated in an arid environmental condition, the city is exposed to a wide variety of water related issues. Water is critical to life in a desert, and as such, in Bhuj too. The city is facing increasing water stress due to irregular monsoons as a result of global climate change. The irregular monsoons have led to both droughts and floods in recent years with increasing frequency. It is also in an earthquake prone zone to destructive earthquakes.

The water stress is a result of multiple reasons. An increasing urbanization of Bhuj due to rural-urban migration, exacerbated by climate uncertainties in the rural hinterlands of the Kutch region demands more water for sustaining the population. While the nature of economic development characterized by industrial activity and sprawl is in conflict with the environmental realities, leading to exponential growth in demand for water, which couldn’t be solved locally.

As a result of this, Bhuj depends on a huge array of infrastructural arrangements that brings water to the city from the hinterlands. These heavy engineering systems create environmental externalities elsewhere. The infrastructural gaps left by public water supply is filled by private players in a free market system, which creates inequalities in terms of access to drinking water and sanitation systems.

In recent years, an increasing environmental awareness through grassroots activism by expert groups and non-governmental organizations has created momentum towards reviving traditional systems of water infrastructure and sustainable development models. While small in scale, they present an alternative to an unsustainable paradigm.

As Bhuj is in an arid environmental condition, engagement with water defines the quality and nature of human systems. Engaging with water in a central position and leveraging it can help deal with other uncertainties. Thus, intersection of water and space becomes the primary focal point where environmental deterioration, unsustainable behaviors and insufficient water infrastructure capacity are the problematic parameters.

The challenge is to redefine the relationships between water infrastructure and the fragile environment, in a sustainable economic paradigm. The redefined relationship between human, nature and infrastructure is to create positive feedback loops for peaceful coexistence.

Aims of the Project:

With a research and design approach, the project aims to review existing practices for water management and provision, by experimenting with scenarios that focus on ecosystem participation. By understanding that drought is an inherent characteristic of the region, designing with water becomes central in addressing the multitude of challenges Bhuj faces.

We expect to reconfigure the spatial relationship with water and urbanization, where urban occupation will consider the natural hydrological dynamics of the region, and if possible, enhance them to safeguard water provision. Reintegration of water with people through participatory approaches that focus on communal management and sustainability of the system will strengthen the relationship and values Bhuj has with the provision and use of water.

Urban scale: How to revitalize traditional forms of water collection and management, in order to shift to a more localized water provision ecosystem that integrates existing patterns of urbanization and social organization?

We use cookies on our website to give you the most relevant experience by remembering your preferences and repeat visits. By clicking “Accept”, you consent to the use of all the cookies.
AcceptReject
Manage consent

This website uses cookies to improve your experience while you navigate through the website. Out of these, the cookies that are categorized as necessary are stored on your browser as they are essential for the working of basic functionalities of the website. We also use third-party cookies that help us analyze and understand how you use this website. These cookies will be stored in your browser only with your consent. You also have the option to opt-out of these cookies. But opting out of some of these cookies may affect your browsing experience.
Necessary Always Enabled
Necessary cookies are absolutely essential for the website to function properly. These cookies ensure basic functionalities and security features of the website, anonymously.
Functional
Functional cookies help to perform certain functionalities like sharing the content of the website on social media platforms, collect feedbacks, and other third-party features.
Performance
Performance cookies are used to understand and analyze the key performance indexes of the website which helps in delivering a better user experience for the visitors.
Analytics
Analytical cookies are used to understand how visitors interact with the website. These cookies help provide information on metrics the number of visitors, bounce rate, traffic source, etc.
Advertisement
Advertisement cookies are used to provide visitors with relevant ads and marketing campaigns. These cookies track visitors across websites and collect information to provide customized ads.
Others
Other uncategorized cookies are those that are being analyzed and have not been classified into a category as yet.
SAVE & ACCEPT